What the heck is a Chu space? And whatever it is, does it really belong with all the rich mathematical structures we know and love?

Say you have some stuff. What can you do with it?

Maybe it’s made of little pieces, and you can do a different thing with each little piece. 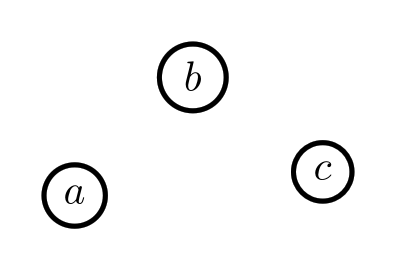 But maybe the pieces are structured in a certain way, and you aren’t allowed to do anything that would break this structure. 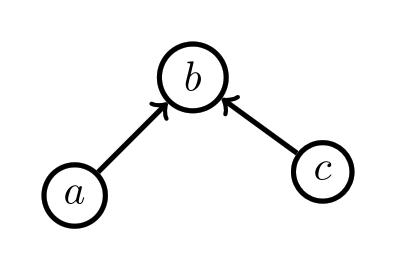 A Chu space is a versatile way of formalizing anything like that!

It doesn’t have any sort of structure, so we show that by allowing all the possible colorings (with two colors). Chu spaces that don’t have any rules (i.e. all colorings are allowed) are equivalent to sets.

What about the one with the arrows from above? How can we make an arrow into a coloring rule? One way we could do it is by stipulating that if there’s an arrow

, we’ll make a rule that if

is colored black, then

has to be colored black too, where

can stand in for any of the pieces. Here’s what that Chu space looks like:

Spend a minute looking at the picture until you’re convinced that our coloring rule is obeyed for every arrow on the left side of the picture. Any Chu space that has this kind of arrow rule has the structure of a poset.

There and back again

If we have two Chu spaces, say

, what sort of maps should we be able to make between them?

We’d like to be able to map the pieces of

to the pieces of

. So this part of our map will just be a normal function between sets:

But we also want our maps to respect the rules of

as it maps to

. How can we check this?

Let’s think through how we would be able to tell if a potential map did break the rules. The map will take pieces of

, so let’s look at the pieces of

that got mapped onto, i.e.

. It will help if we have a concrete example in mind, so let’s consider a potential map that we think should break the rules: one that breaks the arrow structure of a poset by breaking it up into a mere set. For simplicity, we’ll just have the pieces map

take pieces to pieces with the same label.

We can see now that if this potential map breaks the rules, it must be because some of the colorings for

are invalid. Specifically, the colorings highlighted in red:

has a corresponding coloring in

. This will be another function between sets, this time going backwards between the sets of colorings:

Now let’s look at an example of what we expect should be a legit map between Chu spaces.

Again, we are just mapping pieces to pieces with the same labels. This map is ok because even though

has some additional structure, it respects all of the structure from

to have a corresponding coloring in

. For a given piece

, and a given coloring

, we have a function that gives us the color of

We want to make sure that if we have a coloring

, that it gets taken back to a compatible coloring in

. The coloring it gets taken back to is

, and we can check it’s color on any piece

on all the pieces that

maps onto! We can check these colors with

. And so, we can finish our notion of a Chu map by making sure that for all the pieces

, and for all colorings

, that the following equation holds:

Thus, a map between Chu spaces is made of any two functions

which satisfy the above equation.

In order to talk about Chu spaces more easily, let’s define some terminology.

The set of “pieces” is known as the carrier, and each “piece” is called a point. These points index the rows. Likewise, each “coloring” (i.e. column) is indexed by a state, and the set of states is called the cocarrier. Each point-state pair has a “color” which is a value taken from the alphabet (or “palette”). For a Chu space

, we’ll denote this value by

A Chu transform is a map between two Chu spaces:

. It is composed of two functions, the forward function

from the carrier of

to the carrier of

, and the reverse function r from the cocarrier

. These must satisfy the Chu condition in order for this

to be a Chu transform: For every point

Chu spaces with Chu transforms form a category. This category is typically called

Lots of categories are fully embedded into

, and even more if we allow arbitrarily many colors. Let’s look at some examples so we can get a better feel for how we can represent different kinds of rules with coloring rules.

This example also motivates why Chu spaces are called spaces: for any two color Chu space, we can think of each column representing a generalized open set, containing the white colored points.

If we use more colors, we can embed any category of algebraic objects fully and faithfully into Chu! In other words, Chu can represent any algebraic category. To see how this works, let’s see how we can represent any group. The points will be the elements of the group. We’ll need 8 colors, which we’ll think of as being the 8 combinations of red, green, and blue. We’ll think of each relation

spot colored green, and the

spot colored blue. Only colorings which have at least one element in the right color slot for ALL the relations of the group are allowed. We need 8 colors to represent the possibility of the same element appearing in multiple slots. For example, with the zero group, 0 appears in every slot for every relation, so the 0 row will have all the colors which have at least red, green, or blue “turned on”: 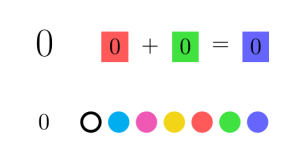 This is not an economical representation. Even for just the cyclic group of order 2, we need lots of rules (41, to be exact)¹.

The Klein 4-group requires 1045 columns under this representation! So the following pictures will be truncated, so that we can see the essential idea without being overwhelmed. Let’s consider a potential Chu transform between

is almost like a question. It chooses which rows 0 and 1 should correspond to (say

respectively), and asks if this is an allowed transformation.

responds by finding the representative of each column from

must be mapped to the 2nd column of

. If it can’t find such a map, we can think of this as an answer in the negative.

Let’s look at another example where the reverse map is slightly more interesting. We expect there to be a group homomorphism from

, so let’s check that this is the case for the Chu spaces as well. (We’ll show a different subset of the columns of

to 1. The reverse map then verifies that the group structure is satisfied, by looking for a column of

for every column of

Notice how the alternating color columns get chosen by

. This is mandated by the Chu condition, given that

maps its rows in an alternating pattern.

Notice also how we didn’t need to add anything else to properly represent group axioms, such as the fact that every group has an identity. Instead, this is encoded implicitly: the identity row will be the only row that doesn’t contain any black, so the Chu condition thus ensures it must always be mapped to the identity of another group represented this way. By simply specifying all the relations that are allowed, we’ve implicitly specified the entire structure! This seemingly innocuous observation is at the heart of the celebrated Yoneda lemma.

.
Proof: The embedding works by defining a functor

, and the states are all the arrows out of

And here are the three Chu spaces that

(one for each object), along with some of the induced Chu transforms (which will be defined below):

must of course be a Chu transform, hence is composed of a pair of functions

between the carriers and cocarriers of

will take a point

(an incoming morphism to

will take a state

to a state of

. This satisfies the Chu condition since function composition is associative:

This functor is faithful, which means that it keeps morphisms distinct: if

are distinct morphisms, then

are also distinct. We can see this by checking the values of

And finally, this functor is full, which means that every Chu transform between the Chu spaces of

comes from a morphism of

. We can see this by taking an arbitrary Chu transform

. From the Chu condition

. By construction, this is a morphism

. Again by the Chu condition,

. This means our transform was just

Having a full and faithful embedding into

means that our category

. This is quite similar to how groups can be represented by vector spaces!

Also notice how we needed three things to make this work: identity morphisms for each object, composition of morphisms, and associativity of composition. These are exactly the requirements for a category! I think this explains why categories are such a fruitful abstraction: it has exactly what we need to make the Yoneda embedding work, and no more.

Hopefully I’ve convinced you that Chu spaces are indeed a mathematical abstraction worth knowing. I appreciate in particular how they provide such a concrete way of understanding otherwise slippery things.

This post just scratches the surface of what you can do with Chu spaces. Now that I’ve laid out the basics, I plan to continue with another post about how Chu spaces relate to linear logic, cartesian frames, Fourier transforms, and more!

Most of the stuff in this post can be found in Pratt’s Coimbra paper. There aren’t many distinct introductions to Chu spaces so I thought it was worth retreading this ground from a somewhat different perspective.

Special thanks to Evan Hubinger for encouraging me to write this up, and to Nisan Stiennon for his helpful feedback!

, there are four relations of the form

[2]: A small category is simply one where the objects and morphisms are both sets. They could even be uncountable sets! A category that isn’t small is

. That’s because the objects of this category are all sets, and we can’t have the set of all sets lest we run into Russell’s paradox. 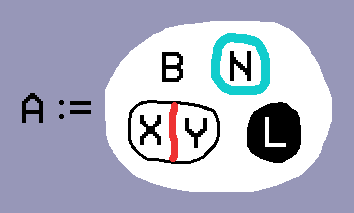 I found a proof of Sperner’s lemma that I am quite satisfied with a few months ago. I’ll repeat the proof here, but more importantly I’d like to share my thought process that lead to Read more…